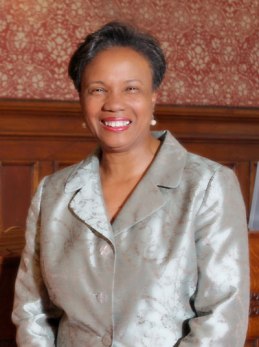 E. Denise Simmons was born on October 2, 1951. She is serving her eighth two-year term on the Cambridge City Council (Massachusetts), and her second term as mayor of Cambridge. In 2008, she became the first openly lesbian African American mayor in the United States.

A lifelong resident of Cambridge, Simmons attended public schools before receiving a bachelor’s degree in Sociology from the University of Massachusetts Boston, and a master’s in Psychotherapy from Antioch College.

In 1982, she established her own business, the Cambridgeport Insurance Agency, and served as the executive director of the Cambridge Civic Unity Committee during the 1980s. In this role, Simmons helped to make the Cambridge public school faculty more diverse. In 1992, she won a spot on the Cambridge School Committee.

In 2001, Simmons ran for and won a seat on the City Council. She launched town hall meetings and worked to ensure that all residents were given a voice inside City Hall, particularly her fellow LGBTQ citizens. Simmons was a member of the Council when Cambridge became the first municipality to issue same-sex marriage licenses..

On January 14, 2008, Simmons was unanimously elected mayor by the Cambridge City Council, becoming the first Black woman mayor in Massachusetts. In the summer of 2009, amid the controversy over the arrest of Harvard University Professor Henry Louis Gates, Jr., Simmons represented the city on national media outlets, including ABC’s “Good Morning America,” CBS’s “The Early Show,” and CNN’s “State of the Nation,” among others.

Simmons ran for an open state senate seat in the 2010 primary but came in third. “Despite coming up a little short at the end, this campaign was still a winning experience for me,” she said at the time. “I have had a tremendous opportunity to get to meet so many people, to learn more about the issues impacting the people in this district, and to make many new friends in Cambridge and beyond.”

After winning re-election to her eighth terms on City Council in November 2015, Simmons was again selected as mayor on January 4, 2016.

Simmons is also a photo archivist, family historian, and mother of four (from a previous marriage to a man) who is raising grandchildren with her wife, Mattie Hayes. “By being a member of a diverse number of communities, I am them and they are me,” Simmons told “Passport.” “I am serving as a woman, as a lesbian, as a parent, as a business woman. I remember being a young mother applying for housing, and watching the owner walk by me when he realized who I was. I’ve been through all that, and I know what it was like.”

We thank Mayor E. Denice Simmons for her numerous contributions to public service, and for her support of our community.