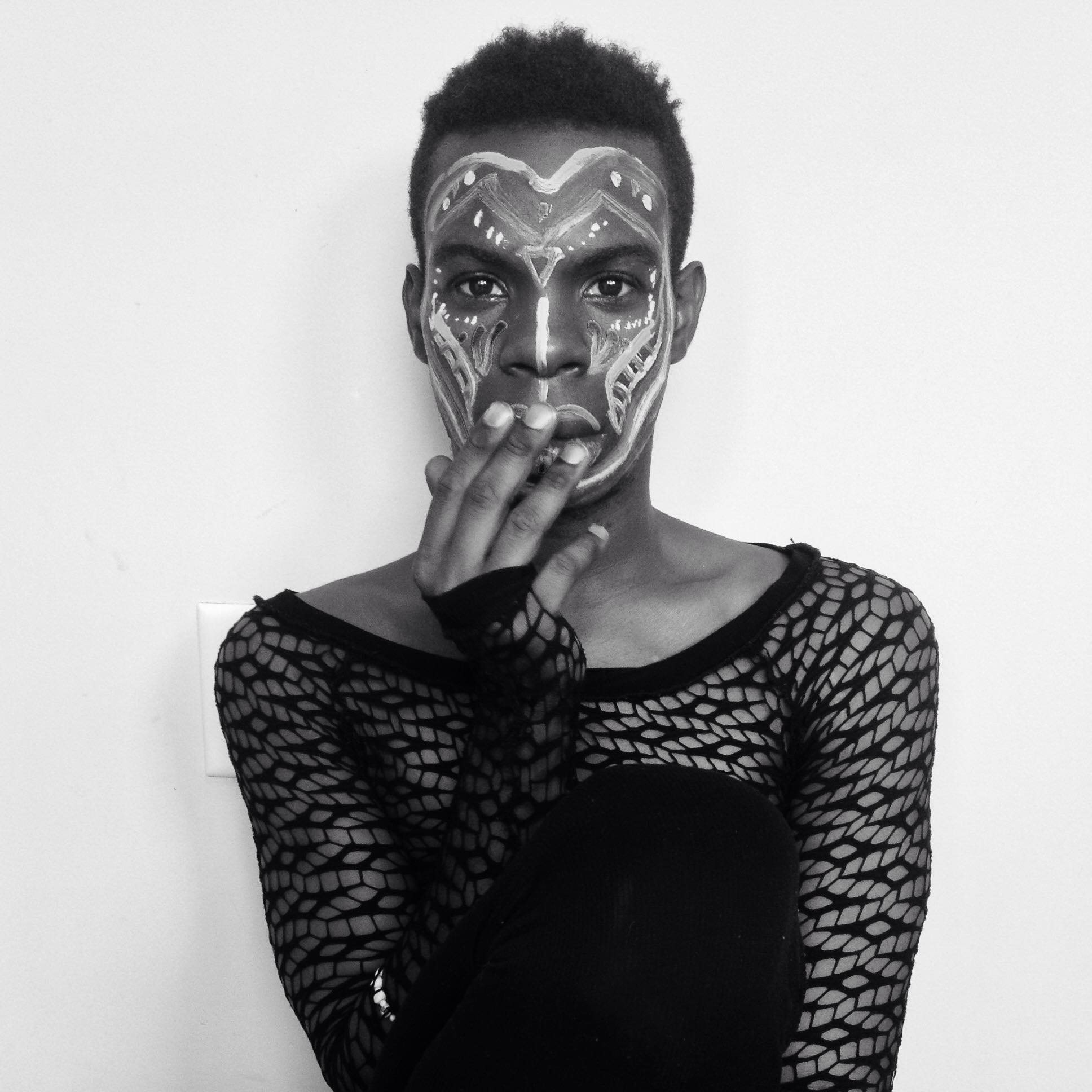 On September 14, 2017, Ubuntu Biography Project honoree Antron-Reshaud Olukayode had an Instagram chat with the Project’s Mark Zustovich, expressing how grateful he was that the biographies and Stephen Maglott’s legacy would live on. The next day, we sent an email to Antron-Reshaud, providing instructions on how to update his bio, and with the note: “You don’t have to update now, since your birthday is in April, but this will give you a jump.” As it would turn out, we wouldn’t have that much time. Less than two months later, we lost Antron-Reshaud, who never had the opportunity to update his story for 2018. In his memory, we present his biography, with edits to reflect his passing. With the exception of a few factual events in the public domain, everything contained in this bio was submitted and approved by him.

Born in Gainesville, Florida as Antron Reshaud Brown (he later changed his surname to Olukayode, which is Yoruba for “God brings happiness”), his father, Joseph Brown, is a saxophonist, photojournalist, former drum major, and alumnus of Florida Agricultural and Mechanical University. Brown’s mother, Brenda Kiner, is both a nurse assisting patients with disabilities and an interior designer. Olukayode had a younger half-brother, Jarvis. He attended Buccholz High School, and following graduation in 2002, enrolled at the University of Florida, and studied part-time at Santa Fe Community College in Arizona.

A self-described “high school love child,” Olukayode told the Ubuntu Biography Project he was ordered to be aborted at the request of the Brown family “due to classism and concerns about the reputation of his young, unmarried parents.” His grandmother, Louise, had a dream about his future, and made it her mission to see to it that he lived to realize that future. After Olukayode was born, the Brown family begrudgingly accepted him into the fold. He was taught piano by his father’s mother, Sarah, and his well-rounded view and love for culture was shaped from the time he was in their lives.

Growing up in government housing projects around Gainesville, without his father present, Olukayode, his brother, and their mother endured the pains and joys of a single parent household. Until the age of four, Olukayode didn’t speak, but his love for artistic expression flourished early on, starting with painting and drawing in kindergarten. His grandmother and mother supplied his crafts, and offered him encouragement. By second grade, Olukayode began his theatrical journey as well as his short story writing, and he won a local writing contest based on a story about going to the grocery store with his mother. At age 15, Olukayode was working with children at his local Boys and Girls Club as an art director, and continued his time there throughout his high school years.

Effeminate, free spirited and gifted, Olukayode said he was constantly teased, picked on, socially rejected, beaten, and abused. By age 17, he had been brutally raped by two young men in a field near his neighborhood. Left to die, he recalled, “a butterfly arrived and landed onto [my] face providing comfort and hope.” Olukayode considered suicide, but heard a voice clearly saying “WRITE,” and so he picked up a pen and notebook sitting on the nightstand, and began his poetic journey.

When he was 19, Olukayode was attending college and met Jordan, a basketball player who won his heart. But he said Jordan was not comfortable with his sexuality, and he brutally raped and physically assaulted Olukayode, infecting him with HIV. When he learned of his diagnosis, Olukayode felt shame and was deeply upset. He dropped out of college, and re-entered the work force by taking dead end jobs. Still living at home with his mother, writing not only became Olukayode’s escape, it became his voice and gave him the strength to leave Gainesville for a better life.

On February 16, 2006, with four boxes, $200 dollars and a Greyhound ticket in hand, Olukayode left for Atlanta, Georgia. When he began his new life, activism and sharing his poetry were the last things on his mind, yet it was Kelvin Barlow who got a glimpse of Olukayode’s work and introduced him to AID Atlanta’s program manager, writer, and mentor, Craig Washington, who asked Olukayode to recite poetry at a Black Gay Pride event called Phyre!

From the moment he opened his mouth, Olukayode knew he had found his calling, and began his spoken word journey. His involvement with AID Atlanta, while working as a host at the High Museum’s Table 1280, landed him his first HIV/AIDS prevention job at National AIDS Education & Services for Minorities (NAESM), under the supervision and guidance of executive director Adolph St. Arromand.

In 2007, Olukayode released his first collection of poetry, “Bohemian Rebel: Naked and Exposed Vol. 1.” A week later, he became homeless. He slept in Piedmont Park, under a ballroom stage at the Sheraton Hotel for Atlanta’s 2007 Black Gay Pride, and couch surfed after repeatedly being put out for refusing to exchange sexual favors for shelter. Finally, after nearly dying in the hospital from a serious infection, Olukayode watched President Obama’s first inauguration in 2009, and became inspired to live again.

Over the next three years—still without a place to call his own—Olukayode produced “The Rising Vol. 2,” a collection of poems and proses about his years being homeless, and his first written stage play, “TRANS-ition,” the story of a teenager transitioning from male to female. He also created his first one man show, “Evicted,” about enduring homelessness while HIV positive. Olukayode released “Fearless Revolution, Vol. 3,” a collection of poems and prose about the relationship he experienced with a soldier. “Ayo: Lost and Found,” a collection of poem and prose examining a year of reinvention, love, spirituality, and finding joy again, was released in 2011.

Olukayode contributed “Afraid of My Own Reflection” to the 2012 anthology, “For Colored Boys Who Have Considered Suicide When the Rainbow is Still Not Enough: Coming of Age, Coming Out, and Coming Home.” He also produced a blog and vblog, With Love ATL, for thebody.com.

In addition to his writing, Olukayode’s passion for music had always been part of growing up in the Baptist church. With a strong eagerness for humanities and culture, he wrote songs since the age of seven, but didn’t seriously pursue music until 2013, when a depression-driven breakup moved him to produce his first EP, “Oluka Oluka.”

Antron-Reshaud Olukayode was a foreman of two Black, gay-focused initiatives: DA CRIBB under the National AIDS Education & Services for Minorities, and AID Atlanta’s The Evolution Project. He was a former member of Lifting Our Voices for Equality (L.O.V.E) Coalition, a member of Common Ground Ministries, and as a spoken word artist, he was a talent for Meak Productions. Olukayode also lobbied in Washington, DC for AIDS Watch, a constituent-based project to increase services for HIV/AIDS. Representing the youth of Georgia, Olukayode met Congressman John Lewis, and had the opportunity to present a copy of “Naked and Exposed” to novelist E. Lynn Harris, who was at Morehouse College promoting “Just Too Good to be True.”

Olukayode was a representative for the Centers for Disease Control’s initiative, “Let’s Stop HIV Together,” for which he made an appearance on the “Just Keke” show on BET, sharing his journey and promoting the campaign. He was creative director of BOS+AROS, a vehicle for change with an avant-garde approach to empower the masses about HIV/AIDS, using art to connect with people and spread awareness. He premiered his multimedia exhibition, ANTRONICA, in 2016.

Olukayode spent the remainder of his life in Atlanta, where he practiced Buddhism, and enjoyed the independent and avant-garde art scene, cooking, blogging, art galleries, nightclub dancing, time with friends, teaching, and spending quality time with his adopted family, especially his nephews and niece.

Antron-Reshaud Olukayode died on November 12, 2017. According to a tribute posted by friend Mark S. King, Olukayode “had developed Kaposi sarcoma, a dangerous cancer that spread from his skin to his other organs during a month-long hospital stay before his death. AIDS caused Antron’s cancer.”

In a Facebook post dated October 25, he wrote: “Having my mother here in the hospital with me is healing. She came all this to be by my side. I am so grateful and grateful for my friends who have been nothing but supportive. Having her witness my friends lavishing the love and meeting her and is extraordinary. A blessing and fills me with joy.”

A 14-year survivor of HIV, Olukayode’s advocacy was infused with his art as a way of leaving his mark, and informing the people of his status and his concerns for prevention and treatment. Olukayode’s art—like his life—was there to inspire and empower others.

You can view Olukayode’s work on his personal blog.