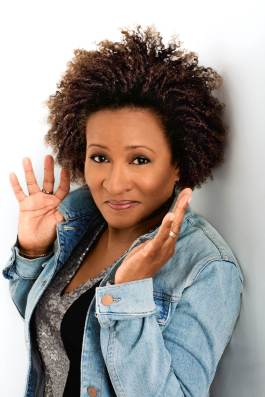 Wanda Sykes was born on March 7, 1964. She is an Emmy Award-winning comedian, actress, writer, and voice artist.

Wanda Sykes was born in Portsmouth, Virginia, and raised in the Washington, DC area. Her mother, Marion Louise, worked in banking, and her father, Harry Ellsworth Sykes, was a United States Army Colonel employed at the Pentagon. Sykes attended Arundel High School in Gambrills, Maryland, and went on to graduate from Hampton University, where she earned her bachelor’s degree in marketing, and became a member of Alpha Kappa Alpha sorority.

Sykes’ family history was researched for an episode of the PBS genealogy program “Finding Your Roots” with Henry Louis Gates, Jr. Her ancestry was traced back to a 1683 court case involving her paternal ninth great-grandmother, Elizabeth Banks, a free white woman and indentured servant, who gave birth to a biracial child, Mary Banks. The child was fathered by a slave, and inherited her mother’s free status. According to historian Ira Berlin, a specialist in the history of American slavery, the Sykes family history is “…the only such case that I know of in which it is possible to trace a Black family rooted in freedom from the late 17th century to the present.”

After college, Sykes’ first job was as a procurement officer with the National Security Agency (NSA), where she worked for five years. Not completely satisfied with her role, Sykes began her stand-up career at a venue in Washington, DC, where she performed for the first time in front of a live audience in 1987. She continued to hone her talents at local venues while at the NSA until 1992, when she moved to New York City, and took a position with a publishing house. Her big break came when opening for Chris Rock at Caroline’s Comedy Club.

Sykes spent five years as part of the HBO’s critically acclaimed “Chris Rock Show.” As a performer and writer on the show, she was nominated for three Primetime Emmy Awards, and in 1999, won for Outstanding Writing for a Variety, Music or Comedy Special. In 2003, Sykes starred in her own short-lived Fox network sitcom, “Wanda at Large.” The same year, Sykes appeared in “Tongue Untied,” an hour-long special on Comedy Central, which ranked her number 70 on its list of the 100 greatest all-time stand-ups. Sykes hosted Comedy Central’s popular show “Premium Blend,” and had a short-lived show on Comedy Central called “Wanda Does It.”

In 2001, Sykes won the American Comedy Award for Outstanding Female Stand Up Comic. She won three more Emmys—in 2002, 2004, and 2005—for her work on “Inside the NFL.” She also starred in and hosted her own special, “Herlarious,” which served to highlight female comics.

Wanda Sykes guest starred in the “Will & Grace” episode “Buy, Buy Baby” in 2006. Sykes’ first HBO comedy special, entitled “Wanda Sykes: Sick & Tired,” premiered on October 14, 2006. It was nominated for a 2007 Primetime Emmy for Outstanding Variety, Music or Comedy Special. The show was taped in Seattle, Washington, and covered everything from racial profiling to gay marriage. In 2008, Sykes performed as part of Cyndi Lauper’s True Colors Tour for LGBT Rights.

That October, Sykes appeared in a television ad for the Think Before You Speak Campaign, an advertising campaign by the Gay, Lesbian and Straight Education Network (GLSEN) aimed at curbing homophobic slang in youth communities. Sykes publicly expressed being devastated after California voters passed the anti-marriage equality Proposition 8. “With the legislation that they passed, I can’t sit by and just watch. I just can’t do it,” she said at the time. In 2010, Sykes was honored with a Gay, Lesbian Advocates and Defenders (GLAD) award for promoting a good image of equal rights for gays and lesbians.

In 2009, Sykes’ second HBO stand-up special, “I’ma Be Me,” premiered. It was taped at the Warner Theatre in Washington, DC, where she tackled topics like the first Black president, gay cruises, being a new mom, and aging. The special was nominated for two 2010 Primetime Emmy awards: Outstanding Variety, Music or Comedy Special, and Outstanding Writing for a Variety, Music or Comedy Special. Later that year, “The Wanda Sykes Show,” her own late-night talk show, premiered on Fox, and ran until April of 2010.

Sykes was seen in the feature films “Evan Almighty” and “Monster-In-Law.” Her other film credits include “My Super Ex-Girlfriend,” “Pootie Tang,” “Nutty Professor 2; The Klumps,” “Down to Earth,” and “License to Wed,” “Bad Moms,” and “Bad Moms Christmas.” In July of 2012, she was heard in the animated feature “Ice Age: Continental Drift” as Granny. Sykes performed a voice-over for the Fox animated feature “Rio” as the Goose. Her voice is also featured in “Over The Hedge,” “The Barnyard,” “Brother Bear 2,” “Crank Yankers,” and “Ice Age: Collision Course.”

Sykes’ television credits include “The New Adventures of Old Christine,” “Blackish,” and “Broad City.” In 2012, she made a return to HBO’s “Curb Your Enthusiasm” starring opposite Larry David. She was the first African American and first openly gay master of ceremonies for the White House Correspondents’ Dinner.

In addition to her film and television work, Sykes is the author of “Yeah, I Said It,” a book of humorous observations on various topics, published in September 2004.

Wanda Sykes was married to record producer Dave Hall from 1991 to 1998. In November 2008, she publicly came out as gay while at a same-sex marriage rally in Las Vegas. A month earlier, Sykes married her wife, Alex, whom she met in 2006. They live in California with their twins, Lucas and Olivia.

We thank Wanda Sykes for her delightful comedy, her passionate advocacy, and her many contributions to our community.