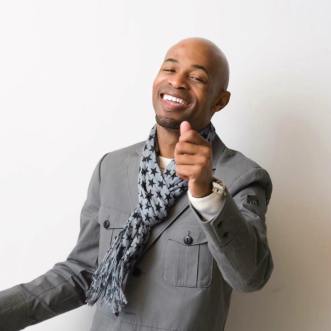 Tim Captville-Domon was born on April 28. He is a faith leader, entrepreneur, writer, activist, vocalist, community builder, and songwriter.

Captville-Domon began singing in his church choir at a young age. He felt “called,” but in his late twenties, he realized that in addition to feeling drawn to religious ministry, he also was same-gender loving. Reconciling his faith and his sexual orientation was not an easy task, but he began a journey that Captville-Domon says progresses to this day. Coming out was difficult because he was the son of a bishop and evangelist in a small town who was expected to marry his high school sweetheart. Captville-Domon knew his family wouldn’t approve of one of their kids being same-gender loving.

“I had no idea when I was younger, that God would use my testimony, to change the lives of others,” Captville-Domon told the Ubuntu Biography Project. “I vividly recall being picked on, bullied, and made fun of by other kids, and I felt as if my heart would break. I would sit in my room crying, wondering why others saw me as nothing more than an object of contempt and ridicule when I had hopes, dreams, and plans for the future, just like everyone else. I tried, calmly and rationally, to change the various things that provoked the ridicule—my hair, my clothes, the way I walked or spoke. But even then they always found something to criticize. The pain of rejection finally dissipated by the time I was in college where others actually liked and respected me. I had many friends and was even chosen as a professor assistant.”

Captville-Domon recalled a day when a young man of about seventeen came up to and said he was an SGL man who is picked on, hated and despised. “When I wrapped my arms around him to hug him, I didn’t just feel sympathy, but a deep empathy for him because I knew exactly how he felt,” said Captville-Domon. “As humbling as it was to be honest, God used my transparency to encourage him and ultimately change his life and I give God all the glory for that!”

Captville-Domon soon decided to relocate to Atlanta, Georgia. He says he didn’t want to close his family off during his time of transition, and regretted not involving them while he tried to reconcile his faith with his truth. But at the same time, he says he couldn’t have been happier with his decision as he found his way, and learned to love the man that he was. Captville-Domon knew that he had been called into ministry just as surely as he knew that he was a gay man.

Like many, Captville-Domon’s first foray into the same-gender loving Christian community was tentative, and he was unsure he’d find a church that would accept him as he was. Then a friend introduced him to Bishop Dennis Meredith and Tabernacle Baptist Church, where he served for several years in its worship and arts department. After Captville-Domon met with Bishop O.C. Allen and Pastor William Horn of The Vision Church of Atlanta, he was given an opportunity to serve as its first chief elder, holding many of the same duties as the pastor. He later served as chief executive officer for The Power Center Church, also in Atlanta. Captville-Domon’s involvement in the three congregations allowed him to grow personally and professionally, and gave him the opportunity to interact with loving ministries.

Captville-Domon began working for the City of Atlanta’s Office of the Mayor as a workforce development officer in 2000. The opportunity provided him with a chance for both personal and professional growth in various divisions within city government and local colleges. It also was an opportunity to work for several years with leaders and stakeholders within the LGBTQ community. Part of his responsibility involved assisting them with various opportunities to transition into the workforce as well as secure adequate housing. He later began working as a consultant development manager for a mobile apps company in Atlanta.

Captville-Domon enjoys engaging others in discussions—whether on stage or sitting down at a conference table—regarding the barriers that keep them from reaching their destiny. As a motivational speaker and teacher, he enjoys gauging his audience’s response to his encouragement to “move forward.” Captville-Domon uses his own unique style to win over LGBTQ audiences, to empower them to action, revealing compassion, and systemic change. By sharing his own story, he gives them permission to learn strategies to move past pain and regret.  He frequently speaks to a diverse audience, and says, “We need to show them that their tomorrow doesn’t have to look like their today or our yesterday.”

He adds, “We all start from different places. The fruits of our labor are not all the same. I created It’s In My Genes to celebrate that we are each handcrafted works from divine fingertips, regardless of our religion (or lack thereof), ethnicity, citizenship, gender, race, sexuality, socio-economic status, or any other variety in which our humanity is celebrated and expressed.”

Captville-Domon has been featured in a number of films and recordings. He is an accomplished soloist and songwriter with several notable recordings, including “Use Me Lord” by Ernest Jefferson and the Irving Mass Choir in Irving, Texas, and other solo projects. Captville-Domon has served on several local boards in the Atlanta area, including CareGivers 911, the Gentleman’s Foundation, Real Husbands and Wives of Atlanta, and Real Single Men and Women of Atlanta.

Married in 2017, Tim and his husband, Thomas Domon, make their home in Atlanta, and enjoy traveling, shopping, and spending time at home celebrating their individual dreams and working together toward their future. They enjoy Sunday brunch with their friends and walks with their dog, Saks. Tim also enjoys reading, writing, singing, and traveling, and has a passion for styling and designing, and an interest in the cosmetology industry, specifically barbering.

In addition to delivering academic lectures at venues such as Atlanta Technical College, Georgia Permiter College, and Laurus Technical College, Captville-Domon speaks regularly at denominational gatherings, festivals, and conferences around the globe.

We thank Tim Captville-Domon for his faith leadership, and his support of our community.